With the Bills essentially eliminated from playoff contention and the front office calling this a rebuilding year, it’s time to look at the NFL Draft order as far as the standings are concerned.  Just a reminder of how the draft tiebreakers work.  If 2 teams finish with the same record, the tiebreaker to determine draft order is strength of schedule (SOS) and the lower (easier) SOS drafts ahead, which makes absolutely no sense to me… 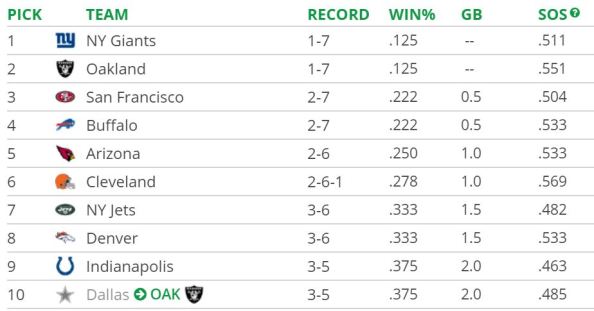 *At this point, I will not be advocating for the Bills to lose (it’s too early for that), I will just be stating some facts about their game and some other important games with draft pick implications.

Possibility To Move Up?
Yes, a real possibility to move up this week.  If the Bills lose to the Jets…they could move up to 3rd.  That is because San Francisco (3rd) plays NY Giants (1st).  A Bills loss and a SF win would get the 49ers to 3 wins and put them ahead of the Bills.  If the Giants won, it would tie them with the Bills, but their SOS would still keep them in front of Buffalo.  If Oakland beats the LA Chargers (yeah, right) then the Bills could move up to 3 that way, too.  Each of the scenarios to move to 3 rely on the Bills losing to the Jets.

Possibility to move down?
Of course, especially if Josh Allen comes back ready to go and the offense gets going!  I believe the Bills could drop as low as 7th, given the results of the weekend.  Look at the SOS for the Jets…you do NOT want to tie the Jets, you will lose that head-to-head every time with their SOS that low.

It’s a week that has a possibility for some big movement for the Bills, or they could stay at 4 for another week.  We’ll find out what happens Sunday at the Meadowlands!