It always seems that a bye week comes at just the right time in the season, and this year that is certainly true for the Bills.  The Bills are getting some much needed rest today, but it is still an important day for the AFC Playoff picture.  For those that will be scoreboard watching, here are the rooting interests for Week 6 (and there are a lot of them). 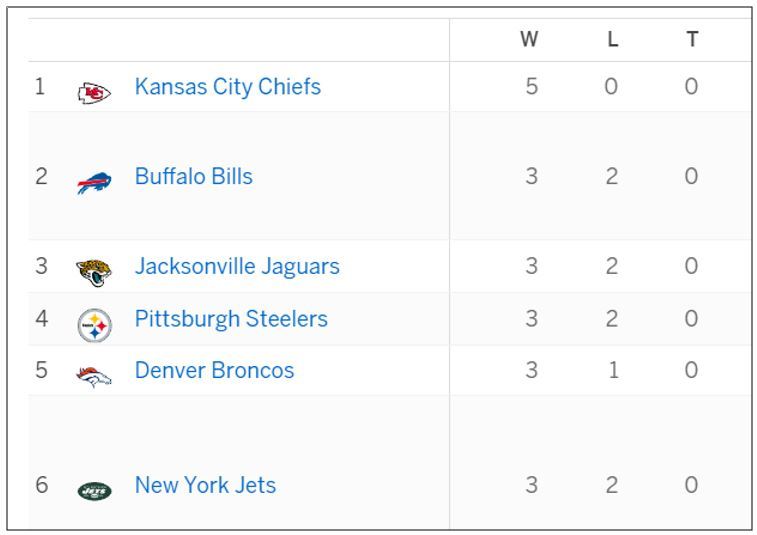 Despite the loss to the Bengals, the Bills are still atop the AFC East and 2nd overall in the conference right now.  Unfortunately, that will change today with either the Patriots or the Jets going to 4-2 (unless they tie, of course).

Every Bills fan should be rooting for Atlanta here.  Despite how awful Miami has played they still sit at 2-2.  Getting them to 2-3 would benefit the Bills in both the division and the Wild Card race.

Both teams are a surprising 3-2.  The winner of this game will become the leader in the AFC East.  I would root for the Jets in this one.  The Jets always seem to give the Patriots a tough time, regardless of who their coach is.  Having the Patriots sit at 3-3 after six games would be a dream for Bills fans.

The top of the AFC North is always crowded with the Steelers and Ravens, so sending the Ravens to .500 would help the Bills’ prospects in the AFC.  As tough as it will be for a rookie QB to do, let’s hope Mitchell Trubisky and the Bears top the Ravens today.

Jacksonville is having the ultimate up and down season, and I am not quite sure what to make of them.  At times this year, Doug Marrone’s squad have proven to be dangerous.  Let’s hope Robert Woods, Sammy Watkins and the Rams are able to top the Jaguars and send them to 3-3 on the year.

Another tough one to call.  As owners of the Chiefs first round pick, it is tempting to root against the Chiefs every week.  The problem is, the Chiefs might be the best team in the league.  Similar to my logic with the Ravens, I think handing a Wild Card contender another loss would be good for the Bills, so I would root for the Chiefs here.

Oakland has been a disappointment so far, and a huge Week 8 matchup with the Bills is looming in two weeks.  Getting the Raiders to 2-4, and out of the playoff picture for now, would benefit the Bills.  Root for ex-Bills coach Anthony Lynn and the Chargers to win their second straight game here.

The Giants are reeling in every sense of the word.  Even though the Bills have the tie-breaker against the Broncos, they should still hope that the losses pile up for them.  As crazy as it might be, let’s hope the Giants escape here with their first win of the season.

An argument can be made for either team here.  The Bills play the Colts later in the year, so they have a chance to earn a tie-breaker against them.  The Titans are probably the more dangerous team, so like I always say, keeping good teams down and handing them as many losses as possible will benefit the Bills.  Root for the Colts here.

What do you think Bills fans?  Do you agree with my rooting interests for Week 6?  Leave your comments below!